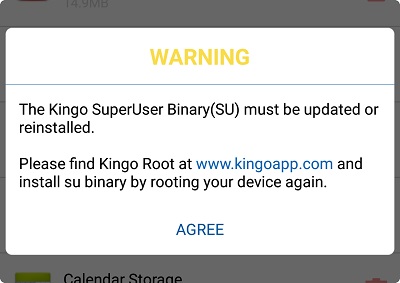 You will see this warning window when

If you haven't rooted your device before installing Kingo SuperUser...

If you have rooted your device and still see this window...

If you have rooted your device with Kingo and then lost it after reboot (also called "temporary root"), it is also caused by locked bootloader. Locked bootloader will prevent your device from being permanently rooted. This situation always happens on devices manufactured with system protection mechanism such as SONY, HUAWEI, HTC, LG, MOTOROLA, etc.

Device with locked bootloader always have some form of internal memory write protection. It will prevent unauthorized user from modifying device system. During the process of gaining root access on a device the write-protected memory, the initial root access is temporary due to the complexities of unlocking memory write access. Any unofficial files (including the most important file "su binary" and "superuser.apk" installed on system partition to root access) will be removed by cycling power, such as rebooting.
In this case, you need to unlock your bootloader first so that the root can be permanent. Or, root your device again after rebooting.

BEHIND ALL THIS MESS

There are two universal ways to root your Android,

The former one is relatively safe while the latter one can be risky. Kingo mainly focused on "exploits" method, but also covers "recovery" for certain tricky devices (hot ones with no exploit available).

Despite the difference of hardware and software configurations of Android devices, similarities that all Android rooting methods share involves the following three essentials:

Generally, there are several stages involves in a proper root process

"Su binary" plays a very important role in Android rooting. It is normally placed in the /system partition of your Android and is called when other apps need superuser permission. The binary checks the database maintained by Superuser.apk to determine if you have already granted rights to the requesting app, and if not, su binary will tell Superuser.apk to display a prompt asking for permission. If no su binary found, you have no root, it is the soul of a rooted device.

Kingo SuperUser is the "face" of su binary. It is the app that manages what apps on your rooted device have access to "su binary". Apps that are granted superuser access have the administrator/root permissions to modify system.